Finished my book. It was ok but frustrating as there were those kinda hint bits in which make you go “WHAT ARE YOU DOING – GO AND CHECK THAT OUT RIGHT NOW!!!!”

Holly nurse in early – “Oh we need you out of here, need the room for someone else. going to day ward for chemo.” I was like WHAT??????????? Was confused – did she mean they needed the room for a few hours and I was coming back? Nope – they were sending me home after! So had shower and packed up. Chemicals on the ward by 11 and could start by 12, I think she said.

Haley came in so I could sign consent form.

Took loads longer. So hot in the bloody day ward. Sweat sweat sweat. No air, massive windows, sun, luckily had the frozen water to put on my neck. Had to ask for the curtain to be shut – I was in pjs but others sitting in the chairs opposite weren’t!!! Nurses nice but main one, Claire, was dealing with me as she has to do the teenagers and it was annoying – she wasn’t actually listen to me or registering my mood I don’t think. Nice nurse called Dinah put my canula in but was funny as laptop was paused on BB when some guy had been shot!

M and D turned up – no space around the bed – it was the first one on the ward right by the sink. Was difficult. D had eye appoint at 2/30.

Took ages for all drugs to do. First one the line needed re sorting. Luckily I hadn’t realised you could drink and eat all way though so had popcorn and coke as distraction with BB. Fiona had given me a lil binny!!!! Sooo cute 😀 She is called flora and has a heart shaped nose and flower fabric lining in her ears. Jellycat. She sat on my lap the whole time.

One guy opposite only just 18, one 23 yr old josh? Just had bloods. Two others as well a bit later on. Irritating other staff coming to ask them questions. One of the guys saying –“ what am I here for again today? I never listen to what the doc says” irritating writing sign in the patient toilet.

Finally finished but had to sit around for meds from pharmacy. TOOK BLOODY AGES. Was handy though as was able to have to food I ordered!!! Haha. I just was soo hot. When D had come back for his appoint and they were taking bits to and from the car, he found the chair we had used on Sunday. Due to his drops (he also had to go back and hand his bit of paper into the eye clinic!), having to wear his sunnies and there being no space around the bed. He bumped the chair into the bed. TWICE. SOOOO painful – they had just taken my canula out. Pain reverberated up my arm.

Claire nurses – helpful comments “Oh you only need to measure your temp 3 times a day” I was thinking one LOZ I was like sure yeah, not worried no probs. Irritating. They also just needed to give a list of stuff you needed to get – luckily already have a themom.

Met A – 26 with leukaemia, had been 6 weeks isolation at beginning in Jan. Lives IoW but was working in LDN – luxury shoe franchiser job and was supposed to be going to Dubai/east to open stores and do training! We swapped numbers – she was fed up of the kids. (we were chatting with her mum in the “social space” whilst trying not to say how annoying the 16yrs old were – the batman trouser and purple head girl were in there eugh. She had been put up in hotels and stuff. She was on c6 which wasn’t nice and they’d had the window break and stuff and some of the beds flooded (which I why I think I got moved around too)

Finally got home. Soo many drugs got given. Lots of pizza and good line of dutyaaaay! 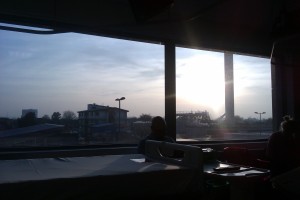